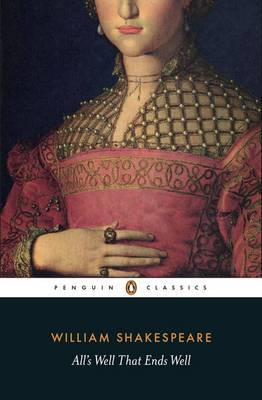 Classified as one of William Shakespeare's 'problem plays' for its unique mix of comedy and tragedy, All's Well that Ends Well is a masterpiece of irony and subtle wit. This Penguin Shakespeare edition is edited by Barbara Everett with an introduction by Janette Dillon. 'All's well that ends well; still the fine's the crown whatever the course, the end is the renown' Helena, physician's daughter of humble birth, cures the King of France, and in return is promised the hand of any nobleman she wishes. But the man she chooses, the proud young Bertram, count of Rosillion, flees to Florence, refusing to consent to the forced marriage unless Helena can pass two seemingly impossible tests. But with the help of the virginal Diana and her mother, Helena uses her wits and wiles to coerce Bertram into submission. Depicting the triumph of trickery over youthful arrogance, All's Well that Ends Well is among Shakespeare's darkest romantic comedies, yet it remains a powerful tribute to the strength of love. This book contains a general introduction to Shakespeare's life and Elizabethan theatre, a separate introduction to All's Well that Ends Well, a chronology, suggestions for further reading, an essay discussing performance options on both stage and screen, and a commentary. William Shakespeare (1564-1616) was born to John Shakespeare and Mary Arden some time in late April 1564 in Stratford-upon-Avon. He wrote about 38 plays (the precise number is uncertain), many of which are regarded as the most exceptional works of drama ever produced, including Romeo and Juliet (1595), Henry V (1599), Hamlet (1601), Othello (1604), King Lear (1606) and Macbeth (1606), as well as a collection of 154 sonnets, which number among the most profound and influential love-poetry in English. If you enjoyed All's Well that Ends Well, you might like Much Ado About Nothing, also available in Penguin Shakespeare. "He was not of an age, but for all time." (Ben Jonson).

William Shakespeare was born in late April 1564 in Stratford-upon-Avon and died in 1616. He is widely regarded as the greatest writer in the English language and the world's pre-eminent dramatist. Stanley Wells is Emeritus Professor of the University of Birmingham and Honorary President of the Shakespeare Birthplace Trust. Janette Dillon, the introducer, is Professor of Drama at the University of Nottingham. Barbara Everett, the original textual editor, has held academic posts at both Oxford and Cambridge.