Cleopatra - I Am Fire and Air by Harold Bloom

Cleopatra is one of the most famous women in history-and thanks to Shakespeare, one of the most intriguing personalities in literature. She is the lover of Marc Antony, defender of Egypt, and, perhaps most enduringly, a champion of life. Cleopatra is supremely vexing, tragic, and complex. She has fascin ated readers and audiences for centuries and has been played by the greatest actresses of their time, from Elizabeth Taylor to Vivien Leigh to Janet Suzman to Judi Dench. Award-winning writer and beloved professor Harold Bloom writes about Cleopatra with wisdom, joy, exuberance, and compassion. He also explores his own personal relationship to the character: Just as we encounter one Anna Karenina or Jay Gatsby when we are in high school and college and another when we are adults, Bloom explains his shifting understanding of Cleopatra over the course of his own lifetime. The book becomes an extraordinarily moving argument for literature as a path to and a measure of our own humanity. Bloom is mesmerizing in the classroom, wrestling with the often tragic choices Shakespeare's characters make. With Cleopatra, he delivers exhilarating clarity and invites us to look at this character as a flawed human who might be living in our world. The result is an invaluable resource from our greatest literary critic. ...Show more Doctor Faustus and Other Plays: Tamburlaine, Parts I and II; Doctor Faustus, A- and B-Texts; the Jew of Malta; Edward II by Christopher Marlowe

Christopher Marlowe (1564-1593), a man of extreme passions and a playwright of immense talent, is the most important of Shakespeare's contempories. This edition offers his five major plays, which show the radicalism and vitality of his writing in the few years before his violent death. Tamburlaine Par t One and Part Two deal with the rise to world prominence of the great Scythian shepherd-robber; The Jew of Malta is a drama of villainy and revenge; Edward II was to influence Shakespeare's Richard II. Doctor Faustus, perhaps the first drama taken from the medieval legend of a man who sells his soul to the devil, is here in both its A- and its B- text, showing the enormous and fascinating differences between the two. Under the General Editorship of Dr Michael Cordner of the University of York, the texts of the plays have been newly edited and are presented with modernized spelling and punctuation. In addition, there is a scholarly introduction and detailed annotation. ABOUT THE SERIES: For over 100 years Oxford World's Classics has made available the widest range of literature from around the globe. Each affordable volume reflects Oxford's commitment to scholarship, providing the most accurate text plus a wealth of other valuable features, including expert introductions by leading authorities, helpful notes to clarify the text, up-to-date bibliographies for further study, and much more. ...Show more 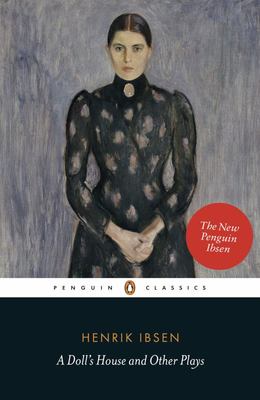 A Doll's House and Other Plays by Henrik Ibsen

Four of Ibsen's most important plays in superb modern translations, part of the new Penguin Ibsen series. With her assertion that she is 'first and foremost a human being', Nora Helmer sent shockwaves throughout Europe when she appeared in Ibsen's greatest and most famous play, A Doll's House. Depicting one woman's struggle to be treated as a rational human being, and not merely a wife, mother or fragile doll, the play changed the course of theatrical history and sparked debates worldwide about the roles of men and women in society. Ibsen's follow-up Ghosts was no less radical, with its unrelenting investigation into religious hypocrisy, family secrets and sexual double-dealing. These two masterpieces are accompanied here by The Pillars of the Community and An Enemy of the People, both set in Norwegian coastal towns and exploring the tensions and dark compromises at the heart of society. The new Penguin series of Ibsen's major plays offer the best available editions in English, under the general editorship of Tore Rem. The plays have been freshly translated by the best modern translators and are based on the recently published, definitive Norwegian edition of Ibsen's works. They all include new introductions and editorial apparatus by leading scholars. ...Show more

This is Shakespeare by Emma Smith

THE SUNDAY TIMES BESTSELLER 'An outstanding book ... lively, curious and passionate' Literary Review Why should you read a book about Shakespeare and his plays? Because he is a timeless genius whose work encapsulates the human condition? Or is it something more unexpected?

The Oresteia - Agamemnon, Women at the Graveside, Orestes in Athens by Aeschylus; Oliver Taplin (Translator)

The most renowned of Aeschylus' tragedies and one of the foundational texts of Western literature, the Oresteia trilogy is about cycles of deception and brutality within the ruling family of Argos. In Agamemnon, afflicted queen Clytemnestra awaits her husband's return from war to commit a terrible act o f retribution for the murder of her daughter. The next two plays, radically retitled here as The Women at the Graveside and Orestes in Athens, deal with the aftermath of the regicide, Orestes' search to avenge his father's death, and the ceaseless torment of the young prince. A powerful discourse on the formation of democracy after a period of violent chaos, The Oresteia has long illuminated the tensions between loyalty to one's family and to the greater community. Now, Oliver Taplin's "vivid and accessible translation" (Victoria Mohl) captures the lyricism of the original, in what is sure to be a classic for generations to come. ...Show more The city burns in the heat of civil war and a servant girl sacrifices everything to protect an abandoned child. But when peace is finally restored, the boy's mother comes to claim him. Calling upon the ancient tradition of the Chalk Circle, a comical judge sets about resolving the dispute. But in a cult ure of corruption and deception, who wins? Written by the grand master of storytelling and peopled with vivid and amusing characters, this is one of the greatest plays of the last century. This Caucasian Chalk Circle is translated by award-winning writer Alistair Beaton, who also wrote the bitingly witty stage play Feelgood and the celebrated TV dramas The Trial of Tony Blair and A Very Social Secretary. The play was toured by Shared Experience in 2009. ...Show more

His extraordinarily gory and spectacularly violent revenge tragedy, William Shakespeare's Titus Andronicus is edited by Sonia Massai, with an introduction by Jacques Berthoud in Penguin Shakespeare. 'Vengeance is in my heart, death in my hand' Rome is in turmoil. With the Emperor dead, his two sons, S aturninus and Bassianus, quarrel over who should succeed him; but neither are as popular as the general Titus Andronicus, returned to Rome victorious after a ten-year campaign, with Tamora, Queen of the Goths, and her three sons as his prisoners. Eschewing the throne, he endorses Saturninus as successor, and sacrifices the Queen's son Alarbus in memory of his own, lost in the war. But when the new emperor spurns Titus's amity and chooses Tamora for his wife, she quickly begins to plot a murderous revenge of barely conceivable cruelty. This book contains a general introduction to Shakespeare's life and Elizabethan theatre, a separate introduction to Titus Andronicus, a chronology, suggestions for further reading, an essay discussing performance options on both stage and screen, and a commentary. If you enjoyed Titus Andronicus, you might like Macbeth, also available in Penguin Shakespeare. 'This is tragedy naked, godless and unredeemed'Kenneth Tynan ...Show more This is the first part of the 'Henriad', continued with the two parts of Henry IV and concluded by Henry V. William Shakespeare's Richard II is a history play dramatizing the rebellion of Henry Bolingbroke, that would eventually see him made King of England. This Penguin Shakespeare edition is edited by Stanley Wells with an introduction by Paul Edmondson. 'Not all the water in the rough rude sea Can wash the balm off from an anointed king'. Banishing his cousin, Bolingbroke, King Richard II prevents a dispute from turning bloody. But Richard is an arrogant and despotic ruler, prone to tyranny and vanity, who listens only to his flatterers. As favour turns against him and Bolingbroke returns to reclaim his land, Richard is humbled and grieved to see that the throne given to him by God might be taken from him by men. This book contains a general introduction to Shakespeare's life and Elizabethan theatre, a separate introduction to Richard II, a chronology, suggestions for further reading, an essay discussing performance options on both stage and screen, and a commentary. William Shakespeare (1564-1616) was born to John Shakespeare and Mary Arden some time in late April 1564 in Stratford-upon-Avon. He wrote about 38 plays (the precise number is uncertain), many of which are regarded as the most exceptional works of drama ever produced, including Romeo and Juliet (1595), Henry V (1599), Hamlet (1601), Othello (1604), King Lear (1606) and Macbeth (1606), as well as a collection of 154 sonnets, which number among the most profound and influential love-poetry in English. If you enjoyed Richard II, you might like Henry IV Part I, also available in Penguin Shakespeare. "We go to Shakespeare to find out about ourselves." (Jeanette Winterson). ...Show more

The Glass Menagerie by Tennessee Williams

Abandoned by her husband, Amanda Wingfield comforts herself with recollections of her earlier, more gracious life in Blue Mountain when she was pursued by 'gentleman callers'. Her son Tom, a poet with a job in a warehouse, longs for adventure and escape from his mother's suffocating embrace, while Laura , her shy crippled daughter, has her glass menagerie and her memories. Amanda is desperate to find her daughter a husband, but when the long-awaited gentleman caller does arrive, Laura's romantic illusions are crushed. ...Show more A new Penguin edition of Ibsen's two great verse plays, in masterful versions by one of our greatest living poets, Geoffrey Hill. These two powerful and contrasting verse dramas by Ibsen made his reputation as a playwright. The fantastical adventures of the irrepressible Peer Gynt - poet, idler, procras tinator, seducer - draw on Norwegian folklore to conjure up mountains, kidnappings, shipwrecks and trolls in an exuberant examination of truth and the self; while Brand, an unsparing vision of an idealistic priest who lives by his steely faith, explores free will and sacrifice. This volume brings together the poet Geoffrey Hill's acclaimed stage version of Brand with a new poetic rendering of Peer Gynt, published for the first time. This Penguin edition includes an interview with Geoffrey Hill about recreating Ibsen in English, an introduction by Janet Garton and editorial materials by Tore Rem. ...Show more

The Bacchae and Other Plays by Euripides

Through their sheer range, daring innovation, flawed but eloquent characters and intriguing plots, the plays of Euripides have shocked and stimulated audiences since the fifth century BC. "Phoenician Women" portrays the rival sons of King Oedipus and their mother's doomed attempts at reconciliation, whi le "Orestes" shows a son ravaged with guilt after the vengeful murder of his mother. In the "Bacchae", a king mistreats a newcomer to his land, little knowing that he is the god Dionysus disguised as a mortal, while in "Iphigenia at Aulis", the Greek leaders take the horrific decision to sacrifice a princess to gain favour from the gods in their mission to Troy. Finally, the "Rhesus" depicts a world of espionage between the warring Greek and Trojan camps. ...Show more